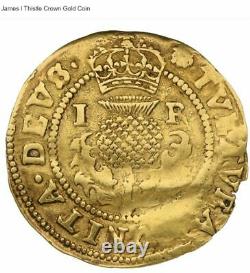 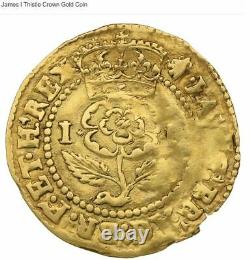 Very RARE - A Gold "Thistle" Crown, featuring James I of England. When Elizabeth I died childless, the throne of England passed to James VI of Scotland, uniting the crowns of the two countries; James the VI of Scotland became James I of England. This gold coin is a fascinating window on this period, depicting the crowned Rose of England on one side and the crowned Thistle of Scotland on the other. The coin is in very fine condition but with a crease that can be seen in the images. Featured in this listing is the actual coin.

The inscription reads TVEATVR VNITA DEVS (may God protect these United Kingdoms). The item "Very RARE Gold Thistle Crown, featuring James I of England" is in sale since Monday, September 20, 2021. This item is in the category "Coins\Coins\British\Hammered (Pre-c.1662)\Other British Hammered Coins". The seller is "chinese-antiques-trading" and is located in Sutton.