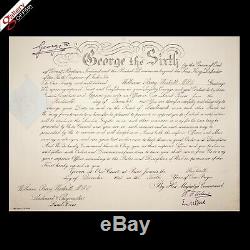 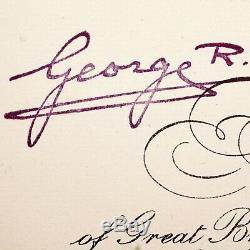 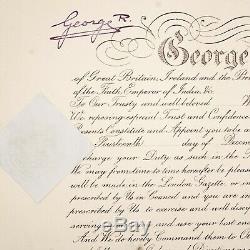 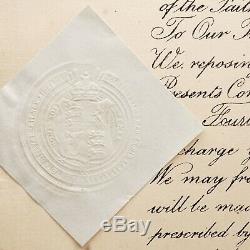 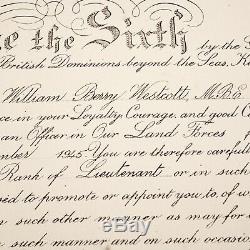 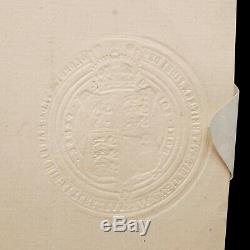 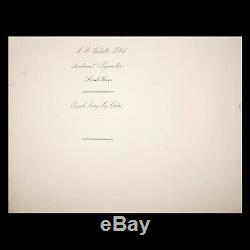 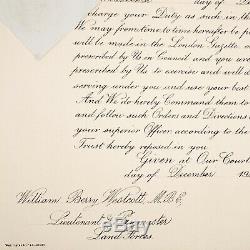 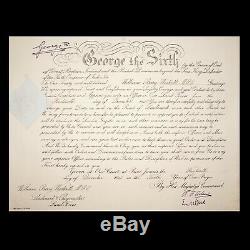 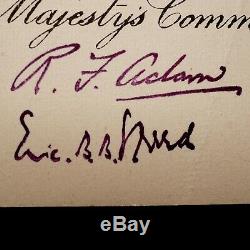 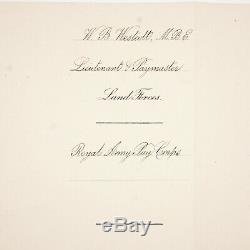 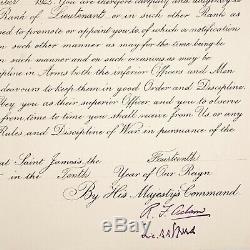 For yourconsideration is a genuine c. 1945 hand-signed British military commissionappointment, personally signed by King George VI of England, including co-signers. This British royalty signed document bears the royal raised wax seal of KingGeorge VI of England. Second son of George V he was named Albert after his great grandfather Prince Albert. AsThe Duke of York he had never expected or wished to succeed to the throne.

Hewas naturally diffident and anxious, and suffered from a speech impediment. But he never lacked bravery or enterprise, and had a strong sense of Duty. He hadfought as a young naval officer at the Battle of Jutland in World War I, andwas the first member of the Royal Family to learn to fly.

Fortified by the influence of his Queen, whoswiftly acquired immense popularity in her own right, George VI coped with theaftermath of the abdication in a way that quickly restored confidence in the monarchy. When thehorrors of World War II descended shortly after­wards on Britain, and on London in particular, the royal couple rose superbly to the occasion. Initially skepticalof Winston Churchill, the King and his Prime Minister soon developed a closepersonal working relationship and they met regularly to discuss the progress ofthe War. King George VI and Queen Elizabeth stayed at what they and theirsubjects saw as their posts all through the Blitz, and showed love and care fortheir people in gestures that stilled the meanest critics. They narrowlyescaped death when bombs exploded beside Buckingham Palace.

Their daughtersserved in uniform, and the identification of the Royal Family with the nationalwill was complete. Followingthe War Britain entered a time of economic austerity and the British Empirebegan to be replaced by the Commonwealth of Nations as former coloniesincluding India became independent.

The war effort had been crushing and theKing's health was permanently affected. He had been a heavy smoker and in 1951had his left lung removed. He died suddenly in the winter of 1952. George VI (Albert Frederick Arthur George; 14 December 1895 - 6 February 1952) was King of the United Kingdom and the Dominions of the British Commonwealth from 11 December 1936 until his death.

He became known as a symbol of British determination to win the Second World War against Germany. Known as "Bertie" among his family and close friends, George VI was born in the reign of his great-grandmother Queen Victoria and was named after his great-grandfather Albert, Prince Consort.

As the second son of King George V, he was not expected to inherit the throne and spent his early life in the shadow of his elder brother, Edward. He attended naval college as a teenager and served in the Royal Navy and Royal Air Force during the First World War. In 1920, he was made Duke of York. He married Lady Elizabeth Bowes-Lyon in 1923, and they had two daughters, Elizabeth and Margaret. In the mid-1920s, he had speech therapy for a stammer, which he never fully overcame. George's elder brother ascended the throne as Edward VIII upon the death of their father in 1936.

However, Edward was forced to choose between the crown and marriage to divorced American socialite Wallis Simpson. With the abdication of Edward to marry Simpson, George ascended the throne as the third monarch of the House of Windsor. In September 1939, the British Empire and Commonwealth - except Ireland - declared war on Nazi Germany.

War with the Kingdom of Italy and the Empire of Japan followed in 1940 and 1941, respectively. The king and queen remained in London during the Blitz. He was seen as sharing the hardships of the common people and his popularity soared.

Britain and its allies were victorious in 1945, but the British Empire declined. Ireland had largely broken away, followed by independence of India and Pakistan in 1947. George relinquished the title of Emperor of India in June 1948 and instead adopted the new title of Head of the Commonwealth. He was beset by smoking-related health problems in the later years of his reign and died of coronary thrombosis in 1952.

He was succeeded by his daughter, Elizabeth II. The item "King George VI Signed Document Autograph Appointment The Crown Dowton Abbey WWII" is in sale since Wednesday, March 27, 2019. This item is in the category "Collectibles\Historical Memorabilia\Royalty Collectibles". The seller is "galleryoff5th" and is located in New York, New York. This item can be shipped worldwide.