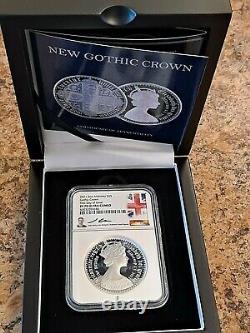 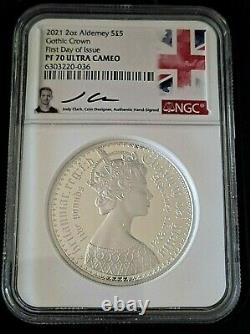 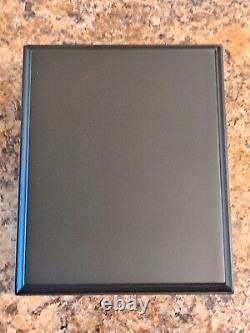 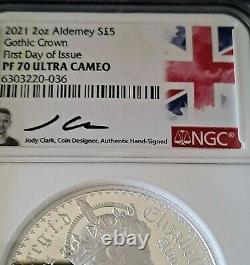 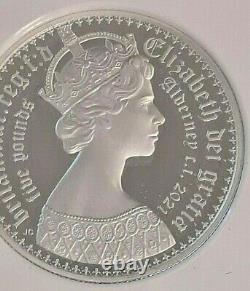 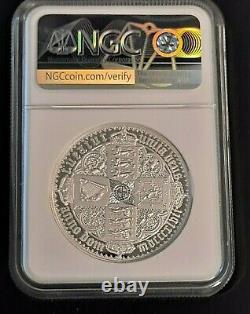 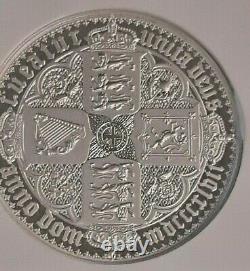 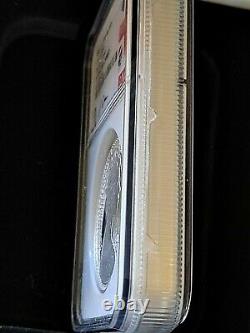 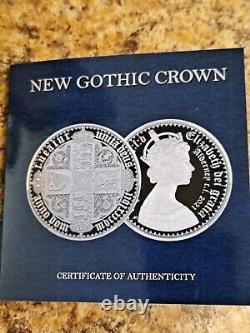 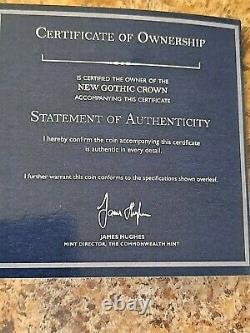 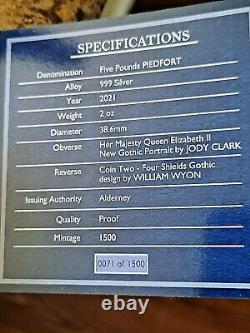 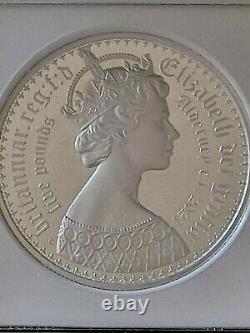 Why does this flawless First Day of Issue 2 oz. Silver Proof 2021 Alderney Gothic Crown belong in your collection? The second release of the Commonwealth Mint's exciting Heritage Series is a tribute to the 1847 Gothic Crown of Queen Victoria.

Imagery of the original Gothic Crown is credited to William Wyon, who was the Chief Engraver of The Royal Mint from 1828 until 1851, and is notably one of the most prolific designers in Mint history. This stunning commemorative release masterfully combines the original 1847 design with a gothic style rendition of a young Queen Elizabeth which was approved by the Palace exclusively for the 2021 dated coin.

This 2021 Alderney Gothic Crown is struck from 2 Troy oz. The coin's designs are gorgeously enhanced by an exquisite proof finish. The coin measures 38.61 mm in diameter. The coin received the First Day of Issue attribution. The perfectly graded coin includes an authentic designer signed certification label.

The coin is part of a small 1,500 piece limited mintage. Obverse: The obverse features a newly designed rendition of Her Majesty Queen Elizabeth II created by acclaimed Royal Mint engraver Jody Clark (designer of the fifth definitive coinage portrait of the Queen). Inspired by the original Gothic Crown, the Queen's appearance is remarkably similar to that of her great-great grandmother Queen Victoria. The monarch is portrayed as a young woman wearing the St.

Edward's Crown and a dress adorned with roses, thistles and shamrocks, the floral emblems of England, Scotland and Ireland. The inscriptions are also fashioned to resemble the original, stating ELIZABETH DEI GRATIA BRITANNIAR. " (Elizabeth by the Grace of God, Queen of the British, Defender of the Faith), along with "5 POUNDS, " "ALDERNEY C. Reverse: The reverse is a replica of Wyon's Gothic Crown image, which depicts a cross composed of crowned shields with the Order of the Garter symbol at the center.

The shields are ornamented with the arms of England, Ireland and Scotland (three lions passant, a harp and lion rampant, respectively), with their floral emblems in between. The design is surrounded by the original Latin inscription "TUEATUR UNITA DEUS ANNO DOM MDCCCXLVII, " meaning May God Guard these United Kingdoms, Year of Our Lord 1847. This 2021 Alderney Gothic Crown 2 oz. Featuring a perfectly sharp strike, pristine surfaces and exceptional eye appeal, the coin was awarded the NGC's most prestigious grade of Proof 70.

The coin is encapsulated in a sonically sealed NGC protective holder with a First Day of Issue certification label graced with the signature of designer Jody Clark. The graded coin is presented in in a handsome display case accompanied by a numbered Authenticity Certificate issued by the Commonwealth Mint. Make this magnificently graded 2021 Alderney Gothic Crown 2 oz. Silver Proof Coin the next addition to your collection!

THE ORIGINAL SILVER CROWNS, FEATURING QUEEN VICTORIA FROM 1847 ARE IN MUSEUMS AND PRIVATE COLLECTIONS. THE 2021 ISSUE FEATURES A UNIQUE YOUNG EFFIGY OF QUEEN ELIZABETH II IN. GOTHIC STYLING BY JODY CLARK.

QUEEN ELIZABETH II HAS NEVER BEEN STYLED IN THIS WAY BEFORE, AND THE EFFIGY WAS APPROVED BY THE PALACE EXCLUSIVELY FOR USE ON THIS 2021 ALDERNEY GOTHIC CROWN. JODY CLARK HAS BEEN RESPONSIBLE FOR MOST OF THE QUEENS EFFIGIES. CUSTOM SOLID WOOD PRESENTATION CASE WITH COA IS INCLUDED. MINTED BY THE COMMONWEALTH MINT. DESTINED TO BECOME A CLASSIC UNITED KINGDOM MINTED COIN. LIMETED TO A MINTAGE OF ONLY 1500 COINS. WITH ONLY 200 GRADING AT PF70 FDOI. The item "2021 Alderney GOTHIC CROWN 2oz SILVER £5 NGC PF70 FDI JODY CLARK SIGNED" is in sale since Monday, October 18, 2021. This item is in the category "Coins & Paper Money\Coins\ World\Europe\UK (Great Britain)\Gold". The seller is "ankenycoincollectors" and is located in Ankeny, Iowa. This item can be shipped to United States.