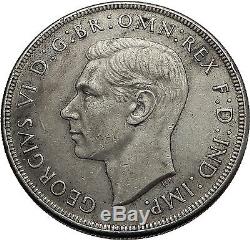 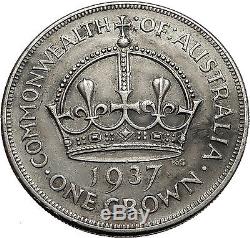 Item: i57935 Authentic Coin of. King: 11 December 1936 6 February 1952. 1937 Silver Crown 38mm (28.23 grams) 0.925 Silver 0.836 oz. Bare head of king George VI left. COMMONWEALTH :OF:AUSTRALIA ONE CROWN , crown above 1937. Available for sale in my store. (Albert Frederick Arthur George; 14 December 1895 6 February 1952) was King of the United Kingdom and the Dominions of the British Commonwealth from 11 December 1936 until his death. He was the last Emperor of India and the first Head of the Commonwealth. As the second son of King George V , he was not expected to inherit the throne and spent his early life in the shadow of his elder brother, Edward. He served in the Royal Navy and Royal Air Force during the First World War , and after it took on the usual round of public engagements. He married Lady Elizabeth Bowes-Lyon in 1923 and they had two daughters, Elizabeth and Margaret. George's elder brother ascended the throne as Edward VIII upon the death of their father in 1936.

However, later that year Edward revealed his desire to marry the divorced American socialite Wallis Simpson. British Prime Minister Stanley Baldwin advised Edward that for political and religious reasons he could not marry a divorced woman and remain king. Edward abdicated in order to marry, and George ascended the throne as the third monarch of the House of Windsor. During George's reign the break-up of the British Empire and its transition into the Commonwealth of Nations accelerated.

The parliament of the Irish Free State removed direct mention of the monarch from the country's constitution on the day of his accession. Within three years, the Empire and Commonwealth, except the Irish Free State, was at war with Nazi Germany. In the next two years, war with Italy and Japan followed. Though Britain and its allies were ultimately victorious, the United States and the Soviet Union rose as pre-eminent world powers and the British Empire declined. After the independence of India and Pakistan in 1947, George remained as king of both countries, but the title Emperor of India was abandoned in June 1948.

He was beset by health problems in the later years of his reign. His elder daughter, Elizabeth, succeeded him. Australia , officially the Commonwealth of Australia , is a country comprising the mainland of the Australian continent , the island of Tasmania , and numerous smaller islands.

It is the world's sixth-largest country by total area. Neighbouring countries include Indonesia , East Timor and Papua New Guinea to the north; the Solomon Islands and Vanuatu to the north-east; and New Zealand to the south-east. For at least 40,000 years before the first British settlement in the late 18th century, Australia was inhabited by indigenous Australians , who spoke languages grouped into roughly 250 language groups.

After the European discovery of the continent by Dutch explorers in 1606, Australia's eastern half was claimed by Great Britain in 1770 and initially settled through penal transportation to the colony of New South Wales from 26 January 1788. The population grew steadily in subsequent decades; the continent was explored and an additional five self-governing crown colonies were established. On 1 January 1901, the six colonies federated , forming the Commonwealth of Australia. Since Federation, Australia has maintained a stable liberal democratic political system that functions as a federal parliamentary democracy and constitutional monarchy comprising six states and several territories.

The population of 23.6 million. Is highly urbanised and heavily concentrated in the eastern states and on the coast.

Australia is a developed country and one of the wealthiest in the world, with the world's 12th-largest economy. In 2012 Australia had the world's fifth-highest per capita income. Australia's military expenditure is the world's 13th-largest.

With the second-highest human development index globally , Australia ranks highly in many international comparisons of national performance, such as quality of life, health, education, economic freedom , and the protection of civil liberties and political rights. Australia is a member of the United Nations , G20 , Commonwealth of Nations , ANZUS , Organisation for Economic Co-operation and Development (OECD), World Trade Organization , Asia-Pacific Economic Cooperation , and the Pacific Islands Forum. Ilya Zlobin, world-renowned expert numismatist, enthusiast, author and dealer in authentic ancient Greek, ancient Roman, ancient Byzantine, world coins & more. Ilya Zlobin is an independent individual who has a passion for coin collecting, research and understanding the importance of the historical context and significance all coins and objects represent. Send me a message about this and I can update your invoice should you want this method.

Whether your goal is to collect or give the item as a gift, coins presented like this could be more prized and valued higher than items that were not given such care and attention to. Is there a number I can call you with questions about my order? When should I leave feedback? Please don't leave any negative feedbacks, as it happens sometimes that people rush to leave feedback before letting sufficient time for their order to arrive.

Visit the "Guide on How to Use My Store" for on an overview about using my store, with additional information and links to all other parts of my store which may include educational information on topics you are looking for. You may also want to do a YouTube search for the term "ancient coin collecting" for educational videos on this topic.

The item "1937 AUSTRALIA Big SILVER CROWN Coin Great Britain UK King George VI i57935" is in sale since Friday, November 4, 2016. This item is in the category "Coins & Paper Money\Coins\ World\Australia & Oceania\Australia\Pre-Decimal". The seller is "highrating_lowprice" and is located in Rego Park, New York.