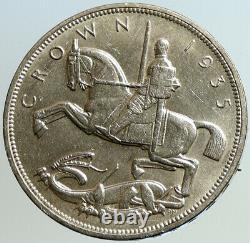 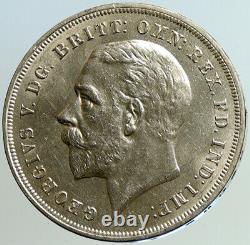 George slaying the dragon left. George V (George Frederick Ernest Albert; 3 June 1865 - 20 January 1936) was King of the United Kingdom and the British Dominions, and Emperor of India, from 6 May 1910 until his death in 1936. He was the second son of Albert Edward, Prince of Wales (later King Edward VII), and the grandson of the reigning British monarch, Queen Victoria.

From the time of his birth, he was third in the line of succession behind his father and his elder brother, Prince Albert Victor, Duke of Clarence and Avondale. From 1877 to 1891, George served in the Royal Navy, until the unexpected death of his elder brother in early 1892 put him directly in line for the throne. On the death of his grandmother in 1901, George's father became King-Emperor of the British Empire, and George was created Prince of Wales.

He succeeded his father in 1910. He was the only Emperor of India to be present at his own Delhi Durbar. His reign saw the rise of socialism, communism, fascism, Irish republicanism, and the Indian independence movement, all of which radically changed the political landscape. The Parliament Act 1911 established the supremacy of the elected British House of Commons over the unelected House of Lords. As a result of the First World War (1914-18) the empires of his first cousins Tsar Nicholas II of Russia and Kaiser Wilhelm II of Germany fell while the British Empire expanded to its greatest effective extent. In 1917, George became the first monarch of the House of Windsor, which he renamed from the House of Saxe-Coburg and Gotha as a result of anti-German public sentiment.

In 1924 he appointed the first Labour ministry and in 1931 the Statute of Westminster recognised the dominions of the Empire as separate, independent states within the Commonwealth of Nations. He was plagued by illness throughout much of his later reign and at his death was succeeded by his eldest son, Edward VIII. Great Britain, also known as Britain, is an island in the North Atlantic off the north-west coast of continental Europe.

The island is the largest in the British Isles archipelago, which also includes the island of Ireland to its west and over 1,000 smaller surrounding islands. The island is dominated by an oceanic climate with quite narrow temperature differences between seasons. Politically, the island is part of the United Kingdom of Great Britain and Northern Ireland, constituting most of its territory: most of England, Scotland, and Wales are on the island, with their respective capital cities, London, Edinburgh, and Cardiff. The term Great Britain often extends to include surrounding islands that form part of England, Scotland, and Wales. A single Kingdom of Great Britain resulted from the Union of Scotland and England (which already comprised the present-day countries of England and Wales) in 1707.

More than a hundred years before, in 1603, King James VI, King of Scots, had inherited the throne of England, but it was not until 1707 that the Parliaments of the two countries agreed to form a unified state. In 1801, Great Britain united with the neighboring Kingdom of Ireland, forming the United Kingdom of Great Britain and Ireland, which was renamed the United Kingdom of Great Britain and Northern Ireland after the Irish Free State seceded in 1922. World-renowned expert numismatist, enthusiast, author and dealer in authentic ancient Greek, ancient Roman, ancient Byzantine, world coins & more. Ilya Zlobin is an independent individual who has a passion for coin collecting, research and understanding the importance of the historical context and significance all coins and objects represent. Send me a message about this and I can update your invoice should you want this method.

Getting your order to you, quickly and securely is a top priority and is taken seriously here. Great care is taken in packaging and mailing every item securely and quickly. What is a certificate of authenticity and what guarantees do you give that the item is authentic? You will be very happy with what you get with the COA; a professional presentation of the coin, with all of the relevant information and a picture of the coin you saw in the listing.

This item is in the category "Coins & Paper Money\Coins: World\Europe\UK (Great Britain)\Crown". The seller is "highrating_lowprice" and is located in this country: US.