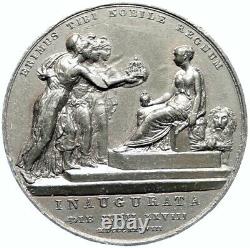 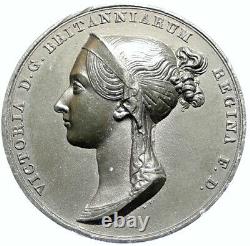 Item: i97067 Authentic Medal of. Enthroned Victoria receiving her crown from Britannia, Hibernia and Scotia. Medal Notes: The coronation of Queen Victoria took place on 28 June 1838, just over a year after she succeeded to the throne at the age of 18. The procession to and from the ceremony at Westminster Abbey was witnessed by unprecedentedly huge crowds, as the new railways made it easier for an estimated 400,000 to come to London from the rest of the country.

Both the Duke of Kent and King George III died in 1820, and Victoria was raised under close supervision by her German-born mother Princess Victoria of Saxe-Coburg-Saalfeld. She inherited the throne aged 18, after her father's three elder brothers had all died, leaving no surviving legitimate children. The United Kingdom was already an established constitutional monarchy, in which the sovereign held relatively little direct political power.

Privately, Victoria attempted to influence government policy and ministerial appointments; publicly, she became a national icon who was identified with strict standards of personal morality. Victoria married her first cousin, Prince Albert of Saxe-Coburg and Gotha, in 1840. Their nine children married into royal and noble families across the continent, tying them together and earning her the sobriquet "the grandmother of Europe". After Albert's death in 1861, Victoria plunged into deep mourning and avoided public appearances. As a result of her seclusion, republicanism temporarily gained strength, but in the latter half of her reign her popularity recovered.

Her Golden and Diamond Jubilees were times of public celebration. Her reign of 63 years and seven months is known as the Victorian era. It was a period of industrial, cultural, political, scientific, and military change within the United Kingdom, and was marked by a great expansion of the British Empire. She was the last British monarch of the House of Hanover.

Her son and successor, Edward VII, belonged to the House of Saxe-Coburg and Gotha, the line of his father. Great Britain , also known as Britain , is an island in the North Atlantic off the north-west coast of continental Europe. With an area of 209,331 km. (80,823 sq mi), it is the largest island in Europe and the ninth-largest in the world.

A single Kingdom of Great Britain resulted from the Union of Scotland and England (which already comprised the present-day countries of England and Wales) in 1707. More than a hundred years before, in 1603, King James VI, King of Scots, had inherited the throne of England, but it was not until 1707 that the Parliaments of the two countries agreed to form a unified state.

In 1801, Great Britain united with the neighboring Kingdom of Ireland, forming the United Kingdom of Great Britain and Ireland, which was renamed the United Kingdom of Great Britain and Northern Ireland after the Irish Free State seceded in 1922. World-renowned expert numismatist, enthusiast, author and dealer in authentic ancient Greek, ancient Roman, ancient Byzantine, world coins & more. Ilya Zlobin is an independent individual who has a passion for coin collecting, research and understanding the importance of the historical context and significance all coins and objects represent. Send me a message about this and I can update your invoice should you want this method.

The matter of fact is that any issues can be resolved, as reputation is most important to me. My goal is to provide superior products and quality of service. How and where do I learn more about collecting ancient coins? Visit the Guide on How to Use My Store.

For on an overview about using my store, with additional information and links to all other parts of my store which may include educational information on topics you are looking for. The item "1838 Great Britain QUEEN VICTORIA Coronation ANTIQUE Crowned Silver Medal i97067" is in sale since Thursday, December 2, 2021. This item is in the category "Coins & Paper Money\Exonumia\Medals". The seller is "highrating_lowprice" and is located in Rego Park, New York. This item can be shipped worldwide.