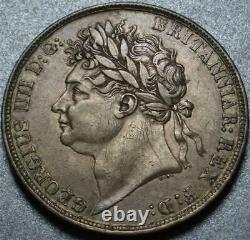 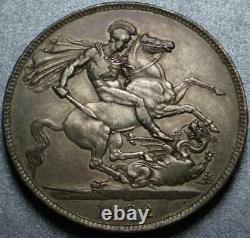 This is an especially nice, large, very low mintage, sterling silver. The second of only two dates this type was struck for circulation, it was produced by the Royal Mint in London and dated 1822 during the third regnal year of the reign of King George IV. There were two different types of. This, the first type, was struck in 1821 and 1822. Only proof coins of this design were struck in 1823.

It was designed by Benedetto Pistrucci, the Italian born gem engraver who was chief engraver at the mint. He also designed the famous and beautiful. "Saint George & the Dragon". On the reverse and it is still used on British coins today.

The King intensely disliked this portrait. In his opinion, it showed him much too lifelike, with bulging face and neck and wiry hair. In 1825 William Wyon redesigned the portrait and a new. Proof patterns were made in 1825 and the second type was struck for circulation in 1826 only.

"The First Gentleman of England". But his bad relations with his father and wife, and his dissolute way of life earned him the contempt of the people and dimmed the prestige of the monarchy. As Regent, taxpayers were angry at his wasteful spending in time of war.

He did not provide national leadership in time of crisis, nor a role model for his people. His ministers found his behavior selfish, unreliable, and irresponsible.

At all times he was much under the influence of favorites. When his father died and George IV held his Coronation in July of 1821, his wife, Queen Caroline, was not allowed into Westminster Abbey, even though she did try to enter. I dont care if you are the Queen, you cant come in!

1822 Saint George killing the Dragon. This famous and very beautiful design, by Benedetto Pistrucci, was first used during the reign of George III. It was altered for these Crowns.

It was enlarged and the surrounding garter was dropped. This reverse would be resurrected for the.

It is on the 2021 British. Arguably one of the most beautiful and enduring designs ever to be put on coinage. Still popular and still used after over 200 years.

It's really impressive on a large crown sized coin. In the same rank as the classic coin designs like Augustus Saint-Gaudins' Striding Liberty now reused on the US Gold Bullion coins and Adolph Weinman's Walking Liberty, now on the Silver Bullion. A lightly used example, it served as the medium of a few exchanges and earned the normal marks and dirt but not a lot of wear. Also, for completeness, it has some serious scratches on the portrait. As grading is subjective, please see the pictures and judge for yourself. For international > please see below. PLEASE, JUST LET ME KNOW. When you expect to pay. I try to start auctions for as low a starting price as I can, and still break even. I believe you have completed your part of the agreement when you pay me, so. I appreciate return feedback if you feel I have earned it. Auctiva offers Free Image Hosting and Editing. The item "1822 GREAT BRITAIN Sterling Silver ONE CROWN King GEORGE IV + St George & DRAGON" is in sale since Sunday, February 28, 2021. This item is in the category "Coins & Paper Money\Coins\ World\Europe\UK (Great Britain)\Crown".coyote" and is located in Tucson, Arizona. This item can be shipped worldwide.