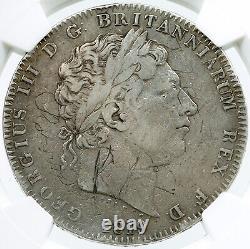 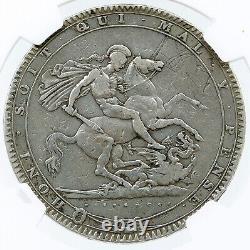 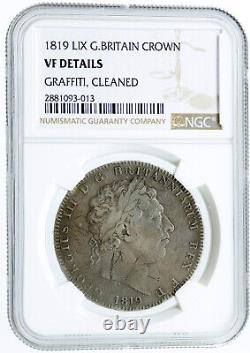 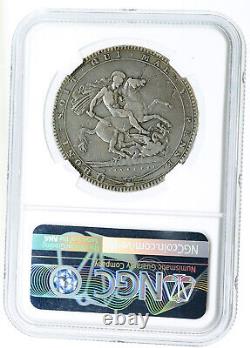 HON· SOITÂ· QUI · MAL · Y · PENSE. P I S T R U C C I, St. George slaying the dragon right within Garter, legend around. George III (George William Frederick; 4 June 1738 - 29 January 1820) was King of Great Britain and King of Ireland from 25 October 1760 until the union of the two countries on 1 January 1801, after which he was King of the United Kingdom of Great Britain and Ireland until his death.

He was concurrently Duke and prince-elector of Brunswick-LÃ¼neburg ("Hanover") in the Holy Roman Empire before becoming King of Hanover on 12 October 1814. He was the third British monarch of the House of Hanover, but unlike his two predecessors, he was born in England, spoke English as his first language, and never visited Hanover. His life and with it his reign, which were longer than those of any of his predecessors, were marked by a series of military conflicts involving his kingdoms, much of the rest of Europe, and places farther afield in Africa, the Americas and Asia.

Early in his reign, Great Britain defeated France in the Seven Years' War, becoming the dominant European power in North America and India. However, many of Britain's American colonies were soon lost in the American War of Independence.

Further wars against revolutionary and Napoleonic France from 1793 concluded in the defeat of Napoleon at the Battle of Waterloo in 1815. In the later part of his life, George III had recurrent, and eventually permanent, mental illness. Although it has since been suggested that he had the blood disease porphyria, the cause of his illness remains unknown. After a final relapse in 1810, a regency was established, and George III's eldest son, George, Prince of Wales, ruled as Prince Regent. On George III's death, the Prince Regent succeeded his father as George IV.

Historical analysis of George III's life has gone through a "kaleidoscope of changing views" that have depended heavily on the prejudices of his biographers and the sources available to them. Until it was reassessed in the second half of the 20th century, his reputation in the United States was one of a tyrant; and in Britain he became "the scapegoat for the failure of imperialism". Great Britain, also known as Britain, is an island in the North Atlantic off the north-west coast of continental Europe. With an area of 209,331 km. (80,823 sq mi), it is the largest island in Europe and the ninth-largest in the world. In 2011 the island had a population of about 61 million people, making it the third-most populous island in the world, after Java in Indonesia and Honshu in Japan. The island is the largest in the British Isles archipelago, which also includes the island of Ireland to its west and over 1,000 smaller surrounding islands. The island is dominated by an oceanic climate with quite narrow temperature differences between seasons. Politically, the island is part of the United Kingdom of Great Britain and Northern Ireland, constituting most of its territory: most of England, Scotland, and Wales are on the island, with their respective capital cities, London, Edinburgh, and Cardiff.

More than a hundred years before, in 1603, King James VI, King of Scots, had inherited the throne of England, but it was not until 1707 that the Parliaments of the two countries agreed to form a unified state. In 1801, Great Britain united with the neighboring Kingdom of Ireland, forming the United Kingdom of Great Britain and Ireland, which was renamed the United Kingdom of Great Britain and Northern Ireland after the Irish Free State seceded in 1922. World-renowned expert numismatist, enthusiast, author and dealer in authentic ancient Greek, ancient Roman, ancient Byzantine, world coins & more. Ilya Zlobin is an independent individual who has a passion for coin collecting, research and understanding the importance of the historical context and significance all coins and objects represent. Send me a message about this and I can update your invoice should you want this method. Getting your order to you, quickly and securely is a top priority and is taken seriously here. Great care is taken in packaging and mailing every item securely and quickly.

What is a certificate of authenticity and what guarantees do you give that the item is authentic? You will be very happy with what you get with the COA; a professional presentation of the coin, with all of the relevant information and a picture of the coin you saw in the listing. Additionally, the coin is inside it's own protective coin flip (holder), with a 2x2 inch description of the coin matching the individual number on the COA.

Whether your goal is to collect or give the item as a gift, coins presented like this could be more prized and valued higher than items that were not given such care and attention to. When should I leave feedback?

Please don't leave any negative feedbacks, as it happens sometimes that people rush to leave feedback before letting sufficient time for their order to arrive. The matter of fact is that any issues can be resolved, as reputation is most important to me. My goal is to provide superior products and quality of service. How and where do I learn more about collecting ancient coins? Visit the Guide on How to Use My Store.

For on an overview about using my store, with additional information and links to all other parts of my store which may include educational information on topics you are looking for. This item is in the category "Coins & Paper Money\Coins: World\Europe\UK (Great Britain)\Crown". The seller is "highrating_lowprice" and is located in this country: US.