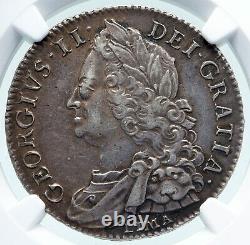 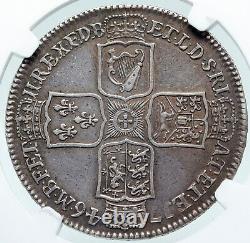 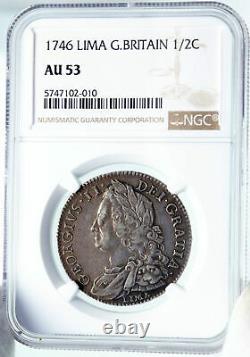 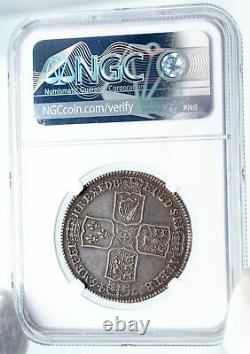 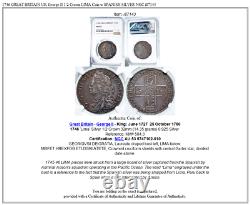 M·B·F·ET H·REX·F·D·B ET·L·D·S·R·I A·T·ET·E·, Crowned cruciform shields with central Garter star, divided date above. 1745-46 LIMA pieces were struck from a large hoard of silver captured from the Spanish by Admiral Anson's squadron operating in the Pacific Ocean. Admiral of the Fleet George Anson, 1st Baron Anson , PC, FRS (23 April 1697 - 6 June 1762) was a Royal Navy officer. Anson served as a junior officer during the War of the Spanish Succession and then saw active service against Spain at the Battle of Cape Passaro during the War of the Quadruple Alliance. He then undertook a circumnavigation of the globe during the War of Jenkins' Ear.

Anson commanded the fleet that defeated the French Admiral de la Jonquière at the First Battle of Cape Finisterre during the War of the Austrian Succession. Anson went on to be First Lord of the Admiralty during the Seven Years' War. George II George Augustus; German: Georg II.

August ; 30 October / 9 November 1683. 25 October 1760 was King of Great Britain and Ireland, Duke of Brunswick-Lüneburg (Hanover) and Prince-elector of the Holy Roman Empire from 11 June 1727 O. George was the last British monarch born outside Great Britain: he was born and brought up in northern Germany. In 1701, his grandmother, Sophia of Hanover, became second in line to the British throne after about 50 Catholics higher in line were excluded by the Act of Settlement, which restricted the succession to Protestants. After the deaths of Sophia and Anne, Queen of Great Britain, in 1714, his father George I, Elector of Hanover, inherited the British throne.

In the first years of his father's reign as king, George was associated with opposition politicians, until they re-joined the governing party in 1720. As king from 1727, George exercised little control over British domestic policy, which was largely controlled by the Parliament of Great Britain. As elector, he spent 12 summers in Hanover, where he had more direct control over government policy. He had a difficult relationship with his eldest son, Frederick, who supported the parliamentary opposition. During the War of the Austrian Succession, George participated at the Battle of Dettingen in 1743, and thus became the last British monarch to lead an army in battle. In 1745, supporters of the Catholic claimant to the British throne, James Francis Edward Stuart ("The Old Pretender"), led by James's son Charles Edward Stuart ("The Young Pretender" or "Bonnie Prince Charlie"), attempted and failed to depose George in the last of the Jacobite rebellions. Frederick died unexpectedly in 1751, nine years before his father, and so George II was ultimately succeeded by his grandson, George III. For two centuries after George II's death, history tended to view him with disdain, concentrating on his mistresses, short temper and boorishness.

Since then, most scholars have re-assessed his legacy and conclude that he held and exercised influence in foreign policy and military appointments. Great Britain , also known as Britain , is an island in the North Atlantic off the north-west coast of continental Europe. With an area of 209,331 km.

(80,823 sq mi), it is the largest island in Europe and the ninth-largest in the world. In 2011 the island had a population of about 61 million people, making it the third-most populous island in the world, after Java in Indonesia and Honshu in Japan. The island is the largest in the British Isles archipelago, which also includes the island of Ireland to its west and over 1,000 smaller surrounding islands.

The island is dominated by an oceanic climate with quite narrow temperature differences between seasons. Politically, the island is part of the United Kingdom of Great Britain and Northern Ireland, constituting most of its territory: most of England, Scotland, and Wales are on the island, with their respective capital cities, London, Edinburgh, and Cardiff. The term Great Britain often extends to include surrounding islands that form part of England, Scotland, and Wales. A single Kingdom of Great Britain resulted from the Union of Scotland and England (which already comprised the present-day countries of England and Wales) in 1707. More than a hundred years before, in 1603, King James VI, King of Scots, had inherited the throne of England, but it was not until 1707 that the Parliaments of the two countries agreed to form a unified state.

Great care is taken in packaging and mailing every item securely and quickly. What is a certificate of authenticity and what guarantees do you give that the item is authentic? You will be very happy with what you get with the COA; a professional presentation of the coin, with all of the relevant information and a picture of the coin you saw in the listing. Additionally, the coin is inside it's own protective coin flip (holder), with a 2x2 inch description of the coin matching the individual number on the COA.

For on an overview about using my store, with additional information and links to all other parts of my store which may include educational information on topics you are looking for. The item "1746 GREAT BRITAIN UK George II 1/2 Crown LIMA Coin w SPANISH SILVER NGC i87143" is in sale since Friday, November 13, 2020.

This item is in the category "Coins & Paper Money\Coins\ World\Europe\UK (Great Britain)\Half Crown". The seller is "highrating_lowprice" and is located in Rego Park, New York. This item can be shipped worldwide.