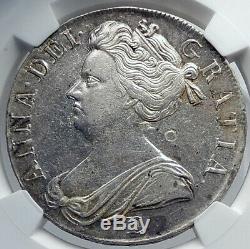 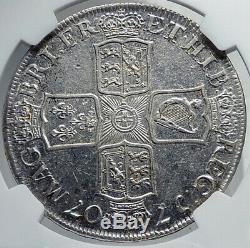 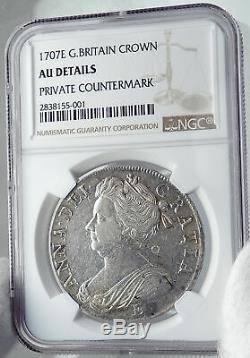 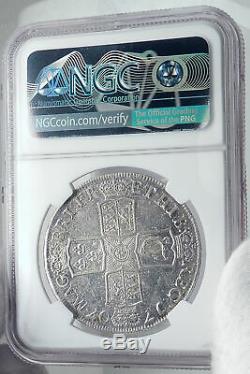 Item: i81740 Authentic Coin of. Under Anne - Queen: 8 March 1702 - 1 May 1707 1707 E Silver Crown 38mm (29.79 grams) 0.925 Silver 0.8952 oz. ASW Reference: KM# 526.1 Certification: NGC. AU DETAILS 2838155-001 ANNA·DEI· GRATIA·, Draped bust of Queen Anne left, legend around. MAG· BRI·FRA· ET·HIB REG· 17 07 E. Crowned cruciform shields with central Garter star, divided date above, legend around. Edge Lettering: DECVS ET TVTAMEN ANNO REGNI SEXTO. Anne (6 February 1665 - 1 August 1714) was the Queen of England, Scotland and Ireland between 8 March 1702 and 1 May 1707. On 1 May 1707, under the Acts of Union, the kingdoms of England and Scotland united as a single sovereign state known as Great Britain. She continued to reign as Queen of Great Britain and Ireland until her death in 1714. Anne was born in the reign of Charles II to his younger brother and heir presumptive, James, whose suspected Roman Catholicism was unpopular in England. On Charles's instructions Anne and her elder sister, Mary, were raised as Anglicans. Mary married their Dutch Protestant cousin, William III of Orange, in 1677, and Anne married Prince George of Denmark in 1683. On Charles's death in 1685, James succeeded to the throne, but just three years later he was deposed in the Glorious Revolution of 1688.

Mary and William became joint monarchs. Although the sisters had been close, disagreements over Anne's finances, status and choice of acquaintances arose shortly after Mary's accession and they became estranged. William and Mary had no children.

After Mary's death in 1694, William reigned alone until his own death in 1702, when Anne succeeded him. During her reign, Anne favoured moderate Tory politicians, who were more likely to share her Anglican religious views than their opponents, the Whigs. The Whigs grew more powerful during the course of the War of the Spanish Succession, until 1710 when Anne dismissed many of them from office.

Her close friendship with Sarah Churchill, Duchess of Marlborough, turned sour as the result of political differences. The Duchess took revenge with an unflattering description of the Queen in her memoirs, which was widely accepted by historians until Anne was re-assessed in the late 20th century. Anne was plagued by ill health throughout her life, and from her thirties, she grew increasingly ill and obese.

Despite seventeen pregnancies by her husband, she died without surviving issue and was the last monarch of the House of Stuart. Under the Act of Settlement 1701, which excluded all Catholics, she was succeeded by her second cousin George I of the House of Hanover. Great Britain , also known as Britain , is an island in the North Atlantic off the north-west coast of continental Europe. With an area of 209,331 km.

Send me a message about this and I can update your invoice should you want this method. Getting your order to you, quickly and securely is a top priority and is taken seriously here. Great care is taken in packaging and mailing every item securely and quickly. What is a certificate of authenticity and what guarantees do you give that the item is authentic? You will be very happy with what you get with the COA; a professional presentation of the coin, with all of the relevant information and a picture of the coin you saw in the listing. Additionally, the coin is inside it's own protective coin flip (holder), with a 2x2 inch description of the coin matching the individual number on the COA. Whether your goal is to collect or give the item as a gift, coins presented like this could be more prized and valued higher than items that were not given such care and attention to.

When should I leave feedback? Please don't leave any negative feedbacks, as it happens sometimes that people rush to leave feedback before letting sufficient time for their order to arrive.

Visit the Guide on How to Use My Store. For on an overview about using my store, with additional information and links to all other parts of my store which may include educational information on topics you are looking for. The item "1707 GREAT BRITAIN UK Engalnd QUEEN ANNE Silver Crown English Coin NGC i81740" is in sale since Friday, November 29, 2019.